Our personal exemptions option, or personal choice to not vaccinate, is being threatened under Assembly Bill AB924.

Copy and paste this letter (and any endnotes) into an email to your legislators today! Don’t forget to add your name and address to the bottom.

It is often stated that those who choose not to vaccinate their children for reasons of personal belief endanger the rest of the public, and this is the rationale behind most of the legislation to end vaccine exemptions currently being considered by federal and state legislators country-wide.

On the contrary, families choosing personal exemption have done their due diligence and reviewed the scientific literature. One of the most important indicators of public health conditions of a country is the infant mortality rate (IMR). Many people assume since the United States has arguably the best health system in the world, they have the healthiest children. What do the numbers tell us?

The data below (Central Intelligence Agency’s 2013 Infant Mortality Rates taken from The World Factbook) is a graphical representation of the number of vaccines given before 6 years of age, under 5 mortality rate, and infant mortality rate of the respective countries. 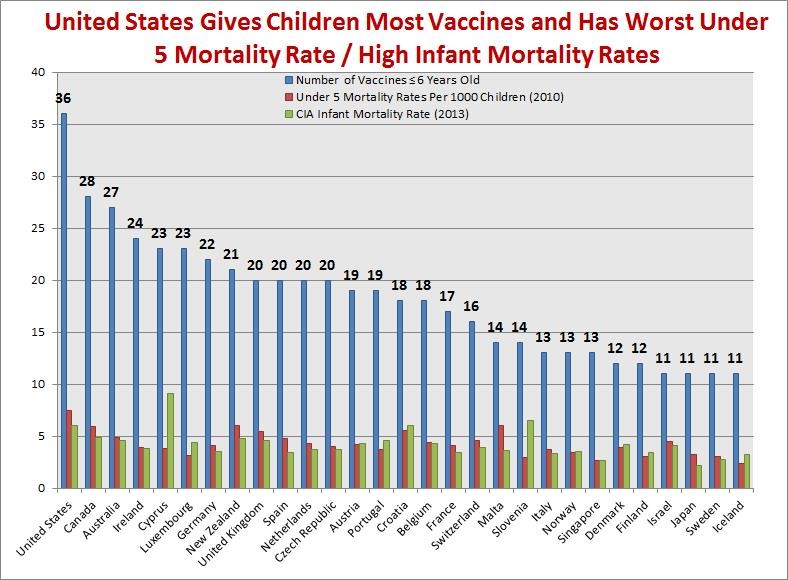 A study by Neil Z. Miller and Gary S. Goldman looking at the correlation between the number of vaccines children get versus the infant mortality rate.*

A separate study performed by Miller and Goldman analyzed the Vaccine Adverse Event Reporting System (VAERS) database. They discovered the babies who received multiple vaccines during a single well-baby visit were the most likely to be hospitalized following their injections.**

A 2011 study showed a similar outcome, showing 33 nations have better infant mortality rates.*** Nations that require more vaccine doses tend to have higher infant mortality rates. The study authors concluded that, “All nations—rich and poor, advanced and developing—have an obligation to determine whether their immunization schedules are achieving their desired goals.”

A 2014 report and map released by the Council on Foreign Relations (CFR) identifies countries with the highest infectious disease outbreaks are the most highly vaccinated populations around the world. This was especially true for measles, mumps, rubella, polo, and pertussis outbreaks. The US, Canada, the EU, Australia, New Zealand and Japan– each with the highest number of mandated vaccines – as well India and Africa where GAVI implemented vaccine campaigns, led the list of nations.

In the U.S., Missouri, the State with the highest vaccination rate, and strictest mandates also has the highest infant mortality rate.****

The science is not settled. If there is risk of injury and death from vaccines, there must be choice. Parents must retain their right to choose for their children and themselves. Mandates do not belong in a free society.

YOUR NAME
YOUR ADDRESS
ANYTOWN, WI

**] Miller, N.Z.; Goldman G.S. Relative trends in hospitalizations and mortality among infants by the number of vaccine doses and age, based on the Vaccine Adverse Event Reporting System (VAERS), 1990-2010.

The Russian Roulette of Vaccines: The Vaccine Debate

This is the original study of Vaccinated vs. Unvaccinated, completed in 1889. Why wasn’t the “science settled” then?